Just about everyone has heard the recommendation to drink eight 8-oz glasses of water a day. Why was that the suggested amount? Inquiring minds want to know.

Eight ounces was a benchmark believed to have been derived from a set of recommendations from the Food and Nutrition Board in 1945 based on average calorie consumption, or a 1900 calorie a day diet (Source: Scientific American). Most of us agree, even very close to average isn’t exact because who, in this day and age, considers themselves average? Each person is unique and has different needs. People need to know their bodies, watch their activity levels, and pay attention to their diets in order to decide what is best for them.

We posed the question to Dr. Bauman, and here is his response:

Everybody has heard the rule to drink eight 8-oz glasses of water per day. It seems as though this recommendation has been around forever. If someone has a diet full of hydrating foods or is working toward vitality by incorporating more hydrating liquids like tea, bone broth, and fresh juice into their daily regimen, it seems they may not need as much water. Is the recommendation for eight 8-oz glasses of water valid?

You are right to realize that the more well-hydrated foods one eats, e.g., fresh fruits and vegetables, soaked seeds/nuts and cooked grains, fresh juices, broths, and non-caffeinated tea, the less water one would need. That said, most [people] eat lots of dry, salty food such as meat, cheese, bread, dried fruit, and power bars, which would suggest that they would benefit from more water, such as eight glasses per day. Folks need to experiment with hydration to find out what works best for them. I like reminding people to drink about a half cup per hour so that their systems stay hydrated rather than have them drink a liter or more, then go without water, tea, or juice for several hours. A guideline is what has value for each person. Individualized recommendations will vary with constitution, conditions, context, and commitment…all of which will change as the diet becomes more fluid and pH balanced. 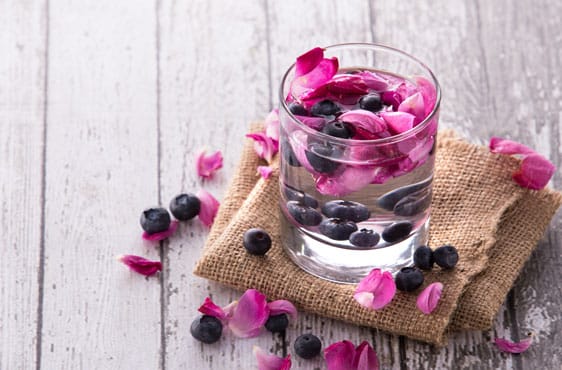 Note: If you have a diet high in starches, try fruit- and  herb-infused purified water if you aren’t drinking enough. The look, flavor, and fun of trying different combinations can help you form the habit of adding water throughout your day.