What’s in Season in July 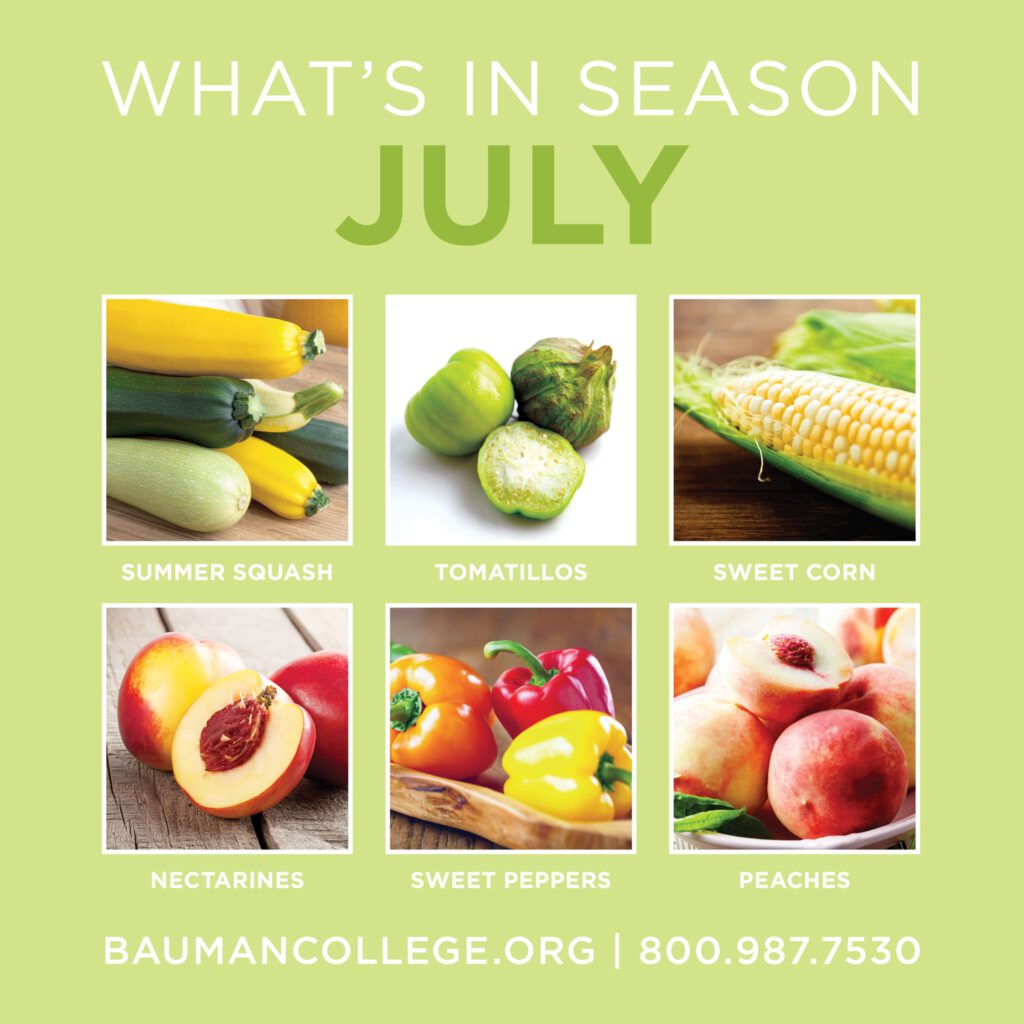 Though both members of the capsicum family, sweet peppers contain less capsaicin—the molecule responsible for spiciness and heat—than chile peppers, which gives them a comparatively mild taste. A colorful addition to any farmers’ market booth, sweet peppers can be green, orange, red, purple, or even white and brown, based on variety and maturity. As they ripen, many peppers change colors from green to orange, red, or purple and increase in flavor and nutritional value. For example, as CUESA states, a red pepper contains twice as much vitamin C as a green pepper. In general, sweet peppers are excellent sources of vitamins C, K, and B6; beta-carotene, thiamine, and folic acid. They also contain zeaxanthin, which can help to prevent cataracts. Be sure to purchase organic peppers because this delicious vegetable is on the Environmental Working Group’s “Dirty Dozen” list of produce containing the most pesticide residue. Buy local from pepper purveyor, Happy Quail Farm, in East Palo Alto, who grows over 20 varieties of sweet peppers.

According to CUESA, peaches and nectarines are actually from the same species, but due to a recessive gene, nectarines have smooth skin instead of the characteristic peach fuzz. Both fruits are high in vitamins A and C, contain calcium, and can be used to stimulate digestion, aid constipation, and improve skin health. According to Rebecca Wood, author of The New Foods Encyclopedia, ripe peaches and nectarines are too fragile to be shipped, so they are often harvested before they have fully matured. However, once picked, they do not increase in sweetness, so it is important to buy locally and at the height of the season. Lucky for Californians, these stone fruits love the Northern Californian climate and there are dozens of varieties available now through October at farmers’ markets in the Bay Area and surrounding counties. Once again, look for that organic label, as these fruits are also on the “Dirty Dozen” list.

As home gardeners will affirm, summer squash grow exceptionally well in the warmer months, often growing faster than it can be consumed. There are hundreds of varieties; from pattypan to zucchini to bitter melon, but in order to enjoy the best flavor, it is important to choose those that are small to medium in size and freshly harvested from the garden. According to Wood, summer squash are 95% water, which makes them particularly hydrating during the hot summer months. They are also high in vitamin C and vitamin B6, which helps the body make serotonin and norepinephrine—neurotransmitters which influence mood. Check out Sonoma Broadway Farms for fresh summer squash varieties.

A staple in Latin American cooking, the tomatillo can range anywhere from the size of a cherry tomato to a small egg, is usually green, and covered with a paper-like husk. The husk should be removed before eating and will start to shrivel when the tomatillo is past its prime. Also known as “tomato verde”, Wood states that tomatillos are like a “green plum—sweet and sour [with a] lemony balm and gelatinous texture.” They add unique flavor to a number of dishes and are often used in salsas and sauces. Tomatillos are a good source of dietary fiber, potassium, manganese, and copper. Along with tomatoes, peppers, and eggplant, tomatillos are part of the nightshade family. Wood states that nightshades, while very nutritious, contain a toxic alkaloid—solanine—that can affect human calcium balance. Those suffering from arthritis might do well to enjoy this group in moderation or avoid them to alleviate arthritic symptoms.

Native to North and Central America, corn on the cob is a staple of summertime barbecues. Among the main types of corn eaten in their whole form—which include popcorn and hominy—sweet corn comes in white and yellow varieties. Due to a defective gene that prevents its sugars from transforming into starch, sweet corn retains its flavor better than other varieties. As Wood states, corn is the only grain that contains vitamin A and it can be used to treat heart disease and lower blood sugar levels. Be sure to look for local, organically grown sweet corn with fresh, green husks and plump kernels. Find baby corn and bi-color corn varieties from Heirloom Organic Gardens and sweet corn from G&S Farms at the farmers’ markets in the Bay Area.