Idlis, or savory rice cakes, are made from a combination of soaked lentils and parboiled rice that is ground and then fermented overnight. Growing up, I did not like idlis. Not that they weren’t good after school tiffins (snacks) or tasty additions to Saturday evening dinner, but because helping my mother to make them took time away from playing hopscotch with my friends.

My mother would soak the rice and lentils overnight in separate containers and ask me to carry the containers, carefully to avoid spilling the water, to the back of the house near the garden, where the in-ground mortar and free-standing pestle (kal ural in tamil) were located. In this same spot, two generations of my family made idli batter.

For the next half hour, I would have to help add water and maybe recite my math multiplication tables or share my challenges at school while the idli batter was slowly and laboriously hand ground. While that half hour seemed endless then, now I see how priceless those moments with my mother were.

Among my family and friends, the ratio of lentils to rice is the closely guarded secret of the idli maker. So when someone tastes the idli, they nod in admiration and ask in subtle and not-so-subtle ways for the secret ratio.

One acquaintance I know loses sleep if the idli has not fermented well. And I know a certain someone who thinks the biome in her hands is what makes the idlis soft and spongy.

Why are idlis so nutritious?

The nutritional benefits of the idlis are increased by the processes of soaking and fermentation.

Phytic acid, found in grains and legumes (in this case rice and lentils), binds to minerals, which slows the absorption of nutrients in our bodies. Soaking them degrades the phytic acid, thereby allowing and enhancing nutrient absorption.

The enteric nervous system (ENS) is a mesh-like network of neurons in the walls of the intestinal tract, which is dubbed as the “second brain.” The health of the ENS is directly correlated to the health of the microbiome.

A wholesome, steamy idli (served with milagai podi, a.k.a. gunpowder or sambhar) crosses all socioeconomic lines, whether served in a restaurant or sold on the roadside in a green banana leaf by little old ladies.

Modern variations of idlis are gaining popularity with the introduction of fried idlis, mini idlis doused in sambhar, fast food idlis served with 10 different chutneys and sides, and even an Indo-Chinese version called the “Idli Manchurian”.

Small batch, hermetically sealed tubs of fresh idli batter fly off the shelves of Indian grocery shops in the U.S. The new trend is making idlis with oats, brown rice, and quinoa to entice the “I don’t do rice” crowd.

The idli-making business has even spawned supplemental industries, such as the production of silicone moulds in addition to the standard stainless steel moulds with the distinctive idli shape. Traditional stone and mortar grinding equipment—which is still used in rural areas—has gotten a technological makeover with the addition of an electric motor.

There was a time in the annals of popular culture in India where the coinage ‘Idli’ meant that you were from the south of India and were somewhat lackluster.

Famous Bollywood actress, Hema Malini, who is classically trained in several Indian dance forms, used to be called “Idli” as a way of being dismissed.

Well, look at her now…all glowing in her idli skin, smooth and fluffy, wholesome, fermented… Umm…let me stop, now I’m describing the idli itself! 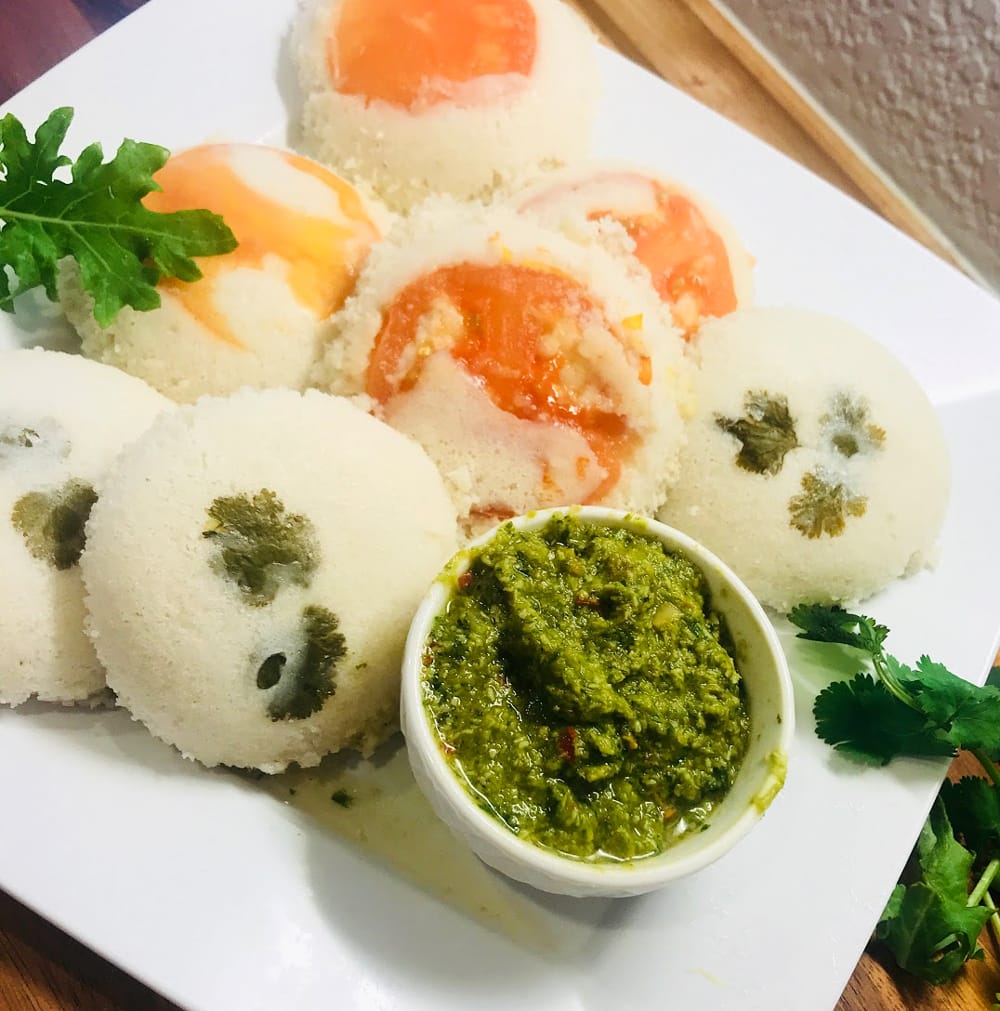 [b]Idli[/b]
Author: Lavanya Srinivasan, Nutrition Consultant Student
Serves: About 40 idlis
Ingredients
Instructions
Notes
[b]Optional:[/b][br]Add diced veggies to the batter mixture. This adds color, character, and carotenes![br][br][b]Note:[/b][br]Idli batter can be stored in the fridge for up to one week or the freezer for up to one month and can also be used to make dosa (a type of Indian pancake).
3.5.3229

Using kale in chutney is a new thing for me, but if I sneak in the new with the old, I become accustomed to it.

Lavanya Srinivasan is a computer engineering graduate who worked in the tech industry for over 20 years. After confronting her own health issues in 2017, she discovered that a whole foods, plant-based diet is the foundation to her well-being and enrolled in the Nutrition Consultant program at Bauman College. After graduation, Lavanya would like to work to influence the nutrition policy of the United States.